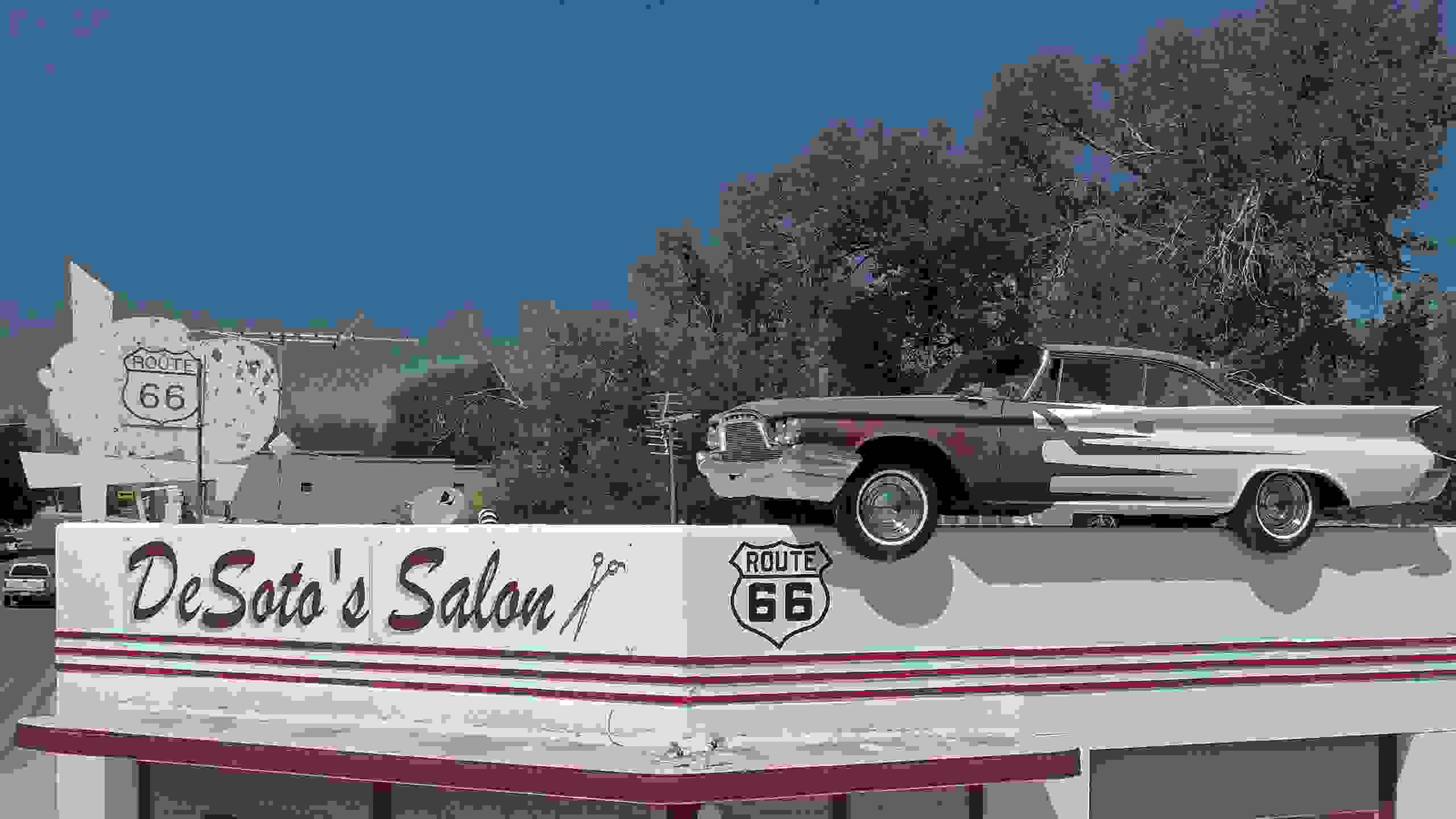 US Route 66 (Will Rogers Memorial Highway) existed from November 26, 1926 - June 27, 1985.  After it was officially removed from the US Highway System on June 27, 1985 when it was replaced by the Interstate Highway System, various states designated portions of the original road as a National Scenic Byway known as "Historic Route 66".

Route 66 was the 20th century version of the golden road to the Promise Land. It wove hundreds of miles through the Midwest (Illinois, Missouri, Kansas) and across Oklahoma, Texas, New Mexico and Arizona before reaching California and the Pacific Coast.  Those adventurous souls who migrated west looking for employment and a better life were the support system that kept the businesses in the communities along the way thriving and prosperous.  Route 66 well deserves the name "The Mother Road" with its nurturing effect on both the travelers and the business owners who experienced its glory over the years, both then and now.

Route 66 travel  "Route 66 became a popular route because of the active promotion of the U.S 66 Highway Association, which advertised it as “the shortest, best and most scenic route from Chicago through St. Louis to Los Angeles." Travel 66...

Back in Time - Route 66 History

History Trivia - "Did You Know"?

On November 11th, 1926 a committee of federal and state highway officials met in Pinehurst, North Carolina, and signed off on the interstate routes for all 48 states. Route 66 was born...

All 8 states that Route 66 travels through has Route 66 Associations. Their goal is the preservation of Route 66. Along with Route 66 preservation efforts they provide interesting history and factual data about Route 66...

Information about the "Land of Opportunity" - USA.- Some statistical data that might interest international travelers about The United States of America on your Route 66 journey.

Route 66 is Ready to Showcase Its Treasures - Cool Springs, Arizona

Join us on "The Mother Road"

Home Sweet Home Away From Home

Many Ways to Travel

Find a Route 66 festival or route 66 event as you journey on your Route 66 Experience..

Return to the 50's at one of the classic diners on Route 66. Many cafe's are in historic buildings and add to your photo fun on Route 66

Family Fun. A stop for all ages for education and reminiscing. Historic Route 66 is on display.

Route 66  RV travel is a good way to meet fellow travelers. In the western states enjoy the wide open spaces.

Route 66 videos - capturing some of the colorful people and events on Route 66.

Route 66 travel. From Chicago to Los Angeles. 2,448 miles of Americana. Explore and enjoy the history of Route 66 and "The Mother Road".

The Route 66 experience encompasses everything from becoming mesmerized by the historic buildings that have been meticulously preserved to meeting well-known and loved personalities whose passion for the Mother Road is so contagious that it becomes a memory emblazend in your mind forever. Travel 6